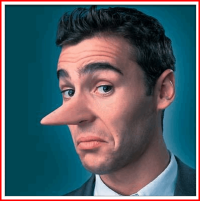 Buyers are Liars is a common phrase in sales training. Of course, buyers--or prospects, as we should be correctly terming them--have their own point of view: that salespeople are also liars who will say anything to get the order.

Sherlock Holmes doesn't need to swing by to deduce something dysfunctional is going on here.

How did this terrible Buyers are Liars situation come about? The answer is Bad Salespeople. Responsibility for every result in selling, good or bad, is on the shoulders of the salesperson. Not the prospect. The prospect only does things if we, the salesperson, set it up for them to, or if we allow them to. If you didn't say it was not okay for a prospect to do something, can you get upset with them when they do it? And when a salesperson doesn't care whether a prospect will truly benefit from getting the product or service pushed...when a salesperson is grasping for that order regardless of what they have to say to get it...when a salesperson abandons the buyer as soon as the money changes hands...two things have happened.

Why Buyers are Liars

First, the customer probably ended up with something they didn't need.

Second, the product or service likely doesn't do everything the buyer thought it was going to.

These two results are going to directly lead to buyer's remorse. And these results are precisely what has lead society to have an extremely negative view of salespeople. So much so that the prospect is entirely skeptical about the salesperson's motives. They enter the conversation convinced that the salesperson's purpose is to rip them off. That's why Buyers are Liars.

As experts on the mission of elevating the field of selling, this is the uphill battle we're dumped into. Whether we have individually done anything wrong or not, this is the attitude prospects bring into sales conversations.

Retail sales trainer Bob Phipps shares how the old adage of a skilled salesperson being able to"sell ice to Eskimos" is not a compliment (see point 3). It's a demonstration of how society thinks salespeople are slimy tricksters who will say anything to get a sale.

If a prospect won't share with you the truth--even a little bit of the truth--about what's really going on in their world, you are never going to be able to truly qualify them. If you can't qualify them, you certainly shouldn't be selling to them.

How to Stop the Buyers are Liars Reflex

Until you can overcome this 'trust hurdle' with your sales process, the buyer will lie by concealing the truth about what's really going on in their situation. They will lead you on in hopes of a free education. All they're interested in, when operating in this mode, is gathering features, benefits and pricing information from different vendors to later compare and determine who they can get what from for the lowest investment. Does this sound like it allows you to differentiate yourself?

No! But who's fault is it? The salesperson's. Like I said above, it is the salesperson's responsibility to ensure you run your process. If you permit the prospect to run their process, you have nobody to blame but yourself when they run true to form and lie, mislead and conceal. As an ethical salesperson, it is on your shoulders to make sure you are finding out whether you can really help this prospect or not--and that is qualifying.

Sometimes, a prospect won't open up to you. Don't take it personally. They aren't able to open up to anybody. A buyer who won't share the truth with you at all is someone you can Go For The No with. "Mr. Prospect...I think we have a problem." "When I've spoken with people before and all they want to know is my price and how I do what I do, it goes nowhere. If you aren't open to sharing with me what's really going on in your situation, I'm afraid I can't help you. So is it over?" Ask this and quickly smoke out who you should continue talking with and who you should end the conversation with.

Seriously, though, if it got to this point, you didn't do a good job of setting up the ground rules for your conversation at the beginning. You let the Buyers are Liars situation happen. Are you running through a description of "How we're going to have this conversation" with your prospect before you start diagnosing? If not, who's to blame for the outcome? ...right.

>> Was this helpful to you? Learn more about ethical and effective selling with Sales On Fire <<