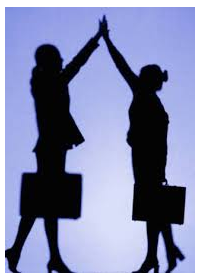 Successful women in sales usually have to fight to get there. I remember the first high-performing saleswoman I met. It was just heading into the later 1990s at the start of my career. She was a rep for a generator manufacturer. We're talking about the part of a power plant that takes mechanical energy and turns it into electricity. Like many other industries the powergen field is dominated by males. Sylvie was nice, but as a consequence of having to prove herself, she was also tough.

And that's something you'll frequently hear about successful women in selling: "She's tough, but..."

Get used to it. They have to be tough.

Janet Spirer, who works with a trainer--Richard Ruff--we've looked at some ideas from previously, has listed six common pitfalls successful women in sales avoid falling into when selling B2B (2018 note: the 2014 article is no longer available). Note that the list that follows is summarized from the article for discussion, and not necessarily my point of view.

The first issue for saleswomen to avoid, according to Spirer, is copying successful salesmen they see. What makes women successful in selling are not the same things as what work for men.

Second, questioning whether or not they belong. The more a woman in sales feels the need to "prove" herself, the more she's feeding insecurities.

Third, waiting or looking for praise from other people is dangerous. Tying your sense of validation to others, rather than promoting your own successes, is asking for trouble.

Fourth, waiting for the perfect situation or knowing everything about a prospect before acting. Successful women in sales research all they can, know they will always have incomplete information no matter how long they wait--and then take action.

Fifth, not speaking up confidently. When a competent woman in sales knows she has something to contribute, she does so in a firm manner. If what should be a statement comes out like a question, it may be trampled.

Sixth, taking results personally. Saleswomen who view resistance from prospects or failing to get an order personally are going to beat themselves up--and for a bad reason.

The Key for Successful Women In Sales

These were Spirer's recommendations. Now I'll comment. I believe all of these items besides the first are applicable to men as well as women in selling. Beliefs, attitudes and behaviors make up the results a salesperson gets. Anyone, female or male, wondering whether they're good enough, or needing approval from others too frequently, or without the ability to depersonalize issues is going to have a rough time in sales.

Observe your beliefs and attitudes. They will predict your behaviors. They are severely limiting factors in most individuals. If your attitudes and beliefs are not in line with how you sell, you are going to have difficulty doing the behaviors necessary to be successful in selling--whether you're a woman or a man.