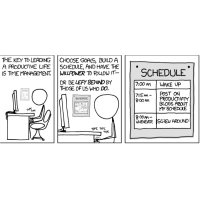 Productivity and Sales typically don't hang out together. And there's a simple reason why: Sales is messy.

Google "productivity and sales" and you'll find a cluster of articles about sales tools--CRMs, time management devices, reminder alarms, apps that shut off your access to Facebook during certain hours. But are these really productivity tools for selling? I say, "Not really." They're gadgets. Feel-good toys. Things to make you feel like you're being productive. The real problem with productivity and sales is the fact that, for most of the activities you have to do to be successful in selling, you have to get uncomfortable.

Are Technological Tools Really Helpful with Productivity and Sales?

So you can have all the best gizmos to find and update customer information, block out your calendar, zap you into realizing there's something else you should be doing than finding out about the travel speed of Costa Rican sloths, and halt your forays into Facebook...but the fact is you can ignore all those, even turn them off, and do what you want to do. Which, typically, is NOT Be Uncomfortable.

Calling a new prospect is uncomfortable. This activity may be more or less uncomfortable depending on your headspace and skill level, but no matter who you are you'll have to shake yourself out of complacency to do it.

And then there's the real messiness of selling. Things almost never go according to plan. There's a good chance the prospect won't be in. There's a possibility they won't be able to talk right now. And there's a chance they won't be a fit with you. Things get interrupted, put down, picked back up, blocked, pushed along, dismissed, accepted. Sales is indeed a messy business.

But having conversations with prospects is the way we get sales.

Given this lack of linearity, how can we manage our productivity? We can't manage or control what prospects and customers do. And they will always do the unexpected. Don't expect a graph or chart or list to cover what you should be doing here.

The Real Secret to Productivity and Sales

Inc. Magazine believed I had a useful tip to share about productivity and sales.

What's the secret we can take from this tip, that Inc. thought was so good they broadcast it to millions of business owners?

The only factor we can really control in selling is ourselves. You. You are the only thing you can control in sales. Your attitudes. Your beliefs. Your behaviors.

Do you make that dial?

Only you can control that. Some app isn't going to do it for you. It can beep, block or blast, but the sole motivator to doing the thing that makes you the money is Y-O-U.

Attitudes and Behaviors that Will Improve Your Productivity and Sales

This article, by leadership and change management expert Dr. Janet Lapp, has some interesting ideas about productivity and sales. I agree with most of them. Look at #1 - it's very similar to what I recommended, isn't it? I definitely have high and low energy periods! There are times during the day where it's going to be that much harder for me to shake off malaise and make that dial...and other times when it's the most natural thing in the world. The difference between me and "them" is that I know when those periods in my day commonly are.

Lapp's points about procrastination and not sharing your goals are really interesting. I also agree with them. They are counter-intuitive. And like many counter-intuitive concepts they work--I recommend doing the behaviors for awhile without thinking about why they work. Just do the behaviors. Once you see your productivity and sales rising, then you can contemplate why they work.

What I do disagree with are the two points on diminishing returns and knowing when to quit. By all means, figure out when your batteries are "dead for the day" and stop. But get back to the work later. WOW! projects, the kind that Tom Peters talks about, aren't created by people who believe 75% is good enough and now let's bugger off for a beer. You do have to be a bit of a lunatic to be exceptional.

Most of your sales productivity will come from a small portion of your efforts. Being conscious about what activities you are or are not doing, and which are the "worth it" steps that take you in the right direction, is the key to achieving more sales in less time. Then make it easier on yourself to take those steps by doing them at the times in the day you feel best--in your "Golden Hours".