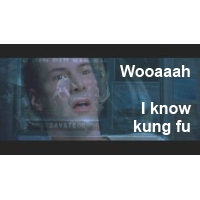 Many people are unwilling to begin badly.

"Oh, I could never make calls" they say, "until I get my script down perfectly."

They have to know exactly what to say before they pick up the phone. Unfortunately, this means they never pick it up.

Let me ask you this:

How many times in your life has a conversation turned out precisely the way you had it planned out in your head?

Let's think further on this:

Did you spring into the world fully armed, like Athena? Did you already know how to play a sport? Did you know a martial art? Could you read and write? Drive?

No of course you did not.

And this isn't The Matrix, where you can get an instant upgrade and now "Wooooahhh" know Kung Fu.

Every single thing you have learned to do, from picking up a fork to eat with to writing a business plan, you have begun badly at.

And there's nothing wrong with beginning badly.

In fact, it's PART OF THE PROCESS.

Let's take it to sales, and specifically prospecting calls.

How Being Willing to Begin Badly Can Be Your Prospecting Advantage

In the mid 2000s I was given a metal fabrication shop to run. A turnaround situation. The new owner had changed the name and phone number, so it was essentially starting over. I hadn't heard of "pain points" or "30-second commercials" yet. But we needed business. So I made a list of contractors, builders and architects.

I had no idea what I would say to them. My opening script wasn't very good. But I asked the right questions, and got decision makers on the line.

After a couple hours of calling, I realized the last prospect had said something an earlier decision maker had said--in almost precisely the same words. Both had described a problem I could fix. Using their own industry jargon. Hmmm, I thought. What if other decision makers in this niche are experiencing the same problem?

So on my next call, I changed my approach a bit. Instead of beginning with my original not-so-good opening, I switched to saying that I helped fix the very problem these two previous prospects had described. I used their language. And the result was astonishing.

"That's exactly the problem we're having," he answered. "Tell me more."

The prospect opened up! They began sharing with me the truth of what was going on in their world! We were over that trust hurdle.

I listened as prospects told me over the next week of calls exactly why they hired companies like my fab shop. The same few reasons kept coming up, again and again. At the end of a week, I was able to pare down a list of five or six into two devastatingly effective reasons why they should hire us.

I say devastatingly effective because after I got those together, every single builder, contractor and architect I was able to speak with sent us work. Oh, it might have been a $100 project for custom plasma-cut keychains for the mens and ladies architect office washrooms. But it could also have been an $8000 staircase railing for a high-end new home. Now that was a great 30-second commercial.

Our problems quickly changed. No longer sales-related, they became operational. How would we get all this work done on time (and that was one of the pain points)?

Good thing I have that operations management skillset.

Back to the point. If I had not been willing to begin badly, work with the script I had, I would not have had those conversations that uncovered the effective pain points.

Every time I enter a new marketplace, I have to do it over again. Yes, my guesses are a good deal better today than they were, and of course I know the format of an opening to start a conversation. But it still takes a week or so of consistent cold calling to uncover these industry-specific pain points. You have to talk to the decision makers. You must hear what they say and write it down.

Yesterday, I started a new-to-me niche. Control equipment. Now I worked in the control equipment field for several years, so my guesses are going to be pretty good. But I made some calls and discovered that what I thought was important is not exactly what my prospects in that industry believe is important when it comes to sales training. As managers and leaders, they have a strategic approach to managing their sales staff--and they don't experience the tactical issues I commonly find sales executives believe so necessary to fix. I have already altered my opening to match.