How to begin selling is a key question, because people shut themselves down before they begin if they don't understand what's going on.

The future you think you see now isn't real.

Military planners had this problem: they'd be planning for the last war. They assumed things would bop along pretty much the same as they had until now—and then Whammo! You get watercooled machineguns, trench systems, tanks, and airplanes that all add up to suddenly making everything you think you know obsolete.

We are doing this all the time.

Our vision extends out in a straight line from our point of view at this moment. We figure things are going to continue as they have until now.

Yet reality is that we are moving along a curve.

And we have much more control over the speed of that change than you may have realized until now.

The Reality of How To Begin Selling

Have a look at this handy little sketch I've put together for you: 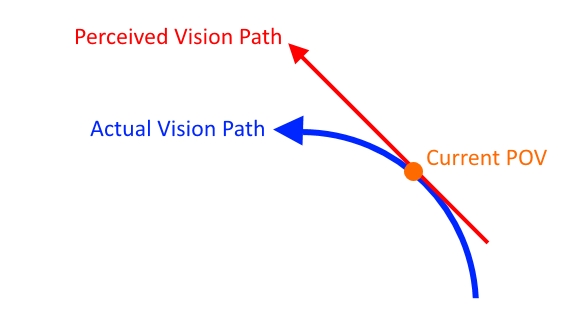 We imagine things are going to proceed as the red arrow shows.

But actually, we're on a path that is going to take us where the blue arc is heading.

There's no “good” or “bad” here. Look at the difference in where the arrowheads end up, though.

Look at the gap!

Now you can creep along the blue arc, so slowly you won't even have the sensation that anything is moving.

Or you can rocket along it so fast you panic and wonder when this roller coaster ride is going to end.

And you can change your speed deliberately.

Now why am I sharing this observation with you?

What relevance does it have to how to begin selling?

So here you have a choice.

You can look out into the red line future. A perceived vision path of closed doors, failure, and shame.

And what effect will that have on you?

You'll shut yourself down. Beaten before you start.

The Mindset Shift of How To Begin Selling

Or you can understand that reality changes. Your perception of it changes. After a period of time, and you putting in the effort, your situation will change. You'll have moved up further along the blue arc. And your tangential Point of View will have changed, too: you'll think of possibilities with certainty that you can't even imagine in your current state.

So my advice to you is, when you start something, don't look into the future.

What you see will be a lie.

It's a future that will never exist, because by then you'll have moved along the blue arc to a different Point of View.

This is Mindset Shift.

This is how you change your reality.

Get to work. Begin moving down the path. Don't look up. Not for three months of sustained effort, at least. That's how to begin selling.

To start to get known as “The guy or gal to talk to about X” it takes about 90 days.

And by then, your reality will have changed. Possibilities you believe are closed to you now and that you would never consider will be open.

Then review your progress, and make your plans.

In the meantime, don't be too hard on yourself. Ignore the fear of failure. It's based on an inaccurate and very-soon-to-be-outdated Point of View.

>> Jason Kanigan is a business strategist and trainer. Book a call with Jason to discuss your mindset questions with this link. <<