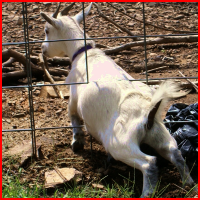 What I've seen over the years here is people learn of an idea: the magic bullet (of the week). They put it into action ONCE and it doesn't work (for whatever reason...poor quality traffic; insufficient traffic--key issue, that one; lousy conversion tool; insufficient followup; poor target market definition; etc.)

And then they announce, "It DIDN'T WORK!!" to the world.

They really have convinced themselves that because they tried this thing one time, one way (imagine, trying only a single headline and then saying the whole project was a failure) it doesn't work. Ever. For anyone.

Then they jump on after the next shiny object...the new magic bullet of the week.

That's the silliness I'm fighting against here. It's rampant.

Stick with something longer than three days. Test one variable change at a time. Yes, keep your eyes open for what works and what doesn't, and why.

Imagine there's a fence you have to jump.

That's the fence you need to get over to start making sales and being successful (BTW, did anyone ever tell you Making Sales is the RESULT, not the guts of, internet marketing? Kinda changes your perspective...there are all these things that need to be done and go right BEFORE you make a sale).

Now imagine all the wannapreneurs, here they are, running full tilt at that fence. Some of them don't even know the fence is there. Many underestimate how tall it is. But there they are, full of false and highly temporary enthusiasm based on some magic bullet they heard about and have awkwardly (how else are you gonna do it the first time) put into practice.

Sure are a lot of broken bodies fallen at the foot of and atop that fence.

What Barrier To Entry Means For You

This is called, in professional marketing terminology, Barrier To Entry.

Most people lack the perspective, the stick-to-itiveness to pass that Barrier To Entry.

What does this mean for you, the individual?

Don't be like the herd. The herd is all beat up and broken in front of that fence.

If you can behave differently, and get over that fence, you'll be Inside.

And Inside is where the money is.

Once you figure it out...how to get over that fence, that Barrier To Entry...you keep that knowledge forever. You know what the process is.

Oh sure, some little techie this or that may change. A variable may need a dial or level adjustment. But you know what the variables are.

Stick with it. Measure and manage. Be intelligent.

Blindly and mindlessly following magic bullets is stupid. You'll end up crashed on the fence every time. Even if you do "succeed" you'll have no idea how to duplicate what you just did.

My impression is that this concept is part of human nature. It is unchanging. We all know "the information is out there", often free of charge. Yet few people will knuckle down and do the research, personal learning and testing necessary to develop skill. They randomly try something once, and when it doesn't work everything related to it is a "scam".

Remember that this is a hurdle separating the wheat from the chaff, the successful from the wannapreneur. Those who expect success from magic beans, rather than developing skill through persistence, are welcome to their fate.

>> For business strategy that gets you past the barrier to entry, get the Sales On Fire program. <<