Sharing new business ideas can be a scary proposition for the idea originator. Here are the kinds of worries people typically ask me about when it comes to sharing their 'baby' with someone else for feedback and possible implementation help.

Do you feel corporations are fair?

I have an idea that could be worth millions to a company. Should I drop it in their suggestion box and hope they pay me?

Should I build a business around it and help them indirectly?

How about getting legal agreements in place and then meeting with the company under an NDA?

How would you protect you business concept/idea? Non-competition agreement? Joint venture contract? Trademark or registration?

My answer begins with the statement that business is business, and that is a different world than personal relationships. Loyalty stands for very little, unfortunately. If you find a business associate who values loyalty, try to stay in touch with them.

An NDA/non-compete and a licensing agreement should keep you protected, if you're going the road of giving the idea to someone else to execute.

This is how an idea's value can really be measured when you bring it to someone else.

You have to know this before you meet and disclose the idea.

And then you still have another factor to consider: honestly (or morality). We can do this with a 2x2 grid demonstrating four possibilities in a sort of "Idea Sharing Risk Table": 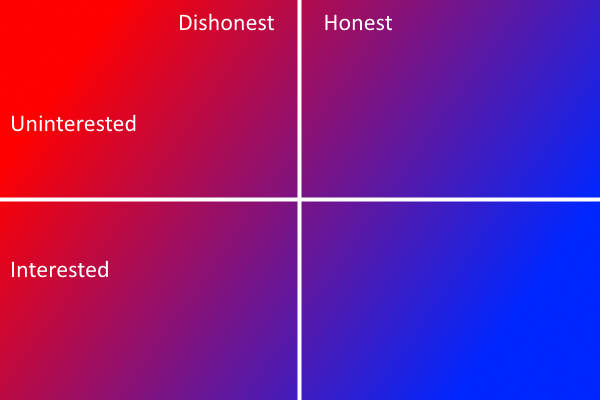 They are uninterested and honest.

They are uninterested and dishonest.

Are you starting to see why it's important to know how they rank on these two factors before you reveal your idea?

We're in negotiation now. Which, by the way, is selling. I am not a lawyer and this is not legal advice. What I am sharing is selling advice.

You had better have your BATNA (Best Alternative to a Negotiated Agreement) figured out for each of these four possibilities.

Copyrights, trademarks, patents are all helpful, but they are not bulletproof protection.

Utility patents, for something like a zipper on an article of clothing being termed as a "device pocket", are the kind of thing Mark Cuban goes berserk about the silliness of. They're the veneer of protection.

Regular patents only protect execution (see how we're back to that word again?) specifically the way you have explained it.

The patent is for a lightweight strip of glue running across the top of a small piece of paper.

If you can come up with another way of temporarily securing the note to other objects without using lightweight glue, 3M's patent is meaningless. You can just go do that.

That's why when you disclose your idea, the NDA is not really protection. If they can figure out another way of executing your idea, they're home free.

If they are interested and honest, they will tell you so. They are ready to get started, will play by the rules, and you can expect to be paid properly. [SAFE]

If they are interested and dishonest, they will tell you it's an airy-fairy idea, they don't like it, it won't work. But they were quick to agree to the meeting. And they kept asking you questions about how you planned to execute the idea. [DANGER]

If they are uninterested and honest, they again will tell you so. It may be hard to book the meeting. They keep bumping the date. This may be a good opportunity for a reality check, and possibly getting execution ideas from someone who knows how to do the work but isn't going to get involved in it. [SAFE]

If they are uninterested and dishonest, you are going to get the run-around. The meeting will take forever to get, or get booked and run so fast it's like poop through a goose. They may ask a lot of questions to "hedge their bets"...but they'll never execute. [SAFE]

As you can see, most of the time, you are safe when sharing new business ideas.

You can be sharing new business ideas all you like. People are already busy with their own ideas, which they believe to be valuable. They are unlikely to remove resources from those to execute your new idea.

So overall, you are relatively safe from being ripped off...especially if you are careful who you share your idea with.

How long it takes you to book the meeting, the process they want to follow, how they ask and answer questions...all these will show you their level of honesty. Easy come, easy go. There should be some rigor involved in setting up an agreement like this. Honest people will probably want to see you put some skin in the game, too.

In the five years since this post was first published, I've continued to see a great deal of nervousness in sharing ideas between new connections. Especially with technical concepts, the new business owner or founder tends to believe someone is going to "steal their baby". But this is a sign of the founder being a newbie. It immediately shows the other party that you are inexperienced and they will probably avoid working with you.

On the other hand if you are experienced and really feel you have reason to be nervous in sharing your ideas with another person, that's a sign you shouldn't be doing business with them. Should you have to "lock things down" and try to protect your intellectual property in a relationship as you go into it, would you truly be surprised later on if the other party found a way to wriggle out of those terms? How things begin is likely how they're going to continue.

Remember that most of the time you're safe to share. In those cases where it feels unsafe, trust your impressions.