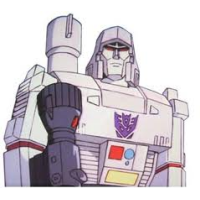 It's Saturday morning. So I'm going to talk about cartoons.

One cartoon, actually, and the antagonist of that story. Oh boy--I've wanted to write about this one for a long time.

The big 4-0 is staring me in the face and that means I was a kid in the early 80s. In 1984 a show came out promoting a line of toys that changed shape from humanoid to a machine, vehicle or something else. In English it was called The Transformers.

Our antagonist is a gravelly-voiced megalomaniac named Megatron. He is a strategist, though of the low animal cunning kind. His plots are not elaborate. But in a show for kids, should they be? He leads a police force-turned-banditos from the legitimately ruling group of the planet Cybertron, down and out for several million years or so after chasing rebels to a mutual crash landing on Earth.

Upon wakeup, a central computer reforms all the Transformers' non-humanoid forms into things that should blend in to our society: cars, trucks, jets, and the like.

Megatron, the epitome of naked force, is naturally given the alternate form of a handgun.

The rebel team--called Autobots--determine that while they need to find alternate sources of energy to power a return to Cybertron, they ought to be nice to the natives about it. And protect the humans from Megatron and his followers if they can.

The bad guys--called Decepticons--have never felt a higher emotion in their collective existence. So nothing gets in the way of their idea of enslaving the Earth. Then they can drain the planet dry of energy to crush the Autobots and triumphantly return to Cybertron and end the civil war.

Got the story so far?

Here's why we're talking about it: the only character I find really interesting in the series is Megatron. The Autobot leader, Optimus Prime, is represented with a cowboy mask over the lower half of his face. So you can't even see him emote clearly. But Megatron's face is bare to the world. There's nowhere for him to hide.

Decepticon society is based upon power. That power can be founded in strength, but it also has a big dash of perception. Starscream, a hyperactive teenager of a lieutenant, is perpetually scheming to remove Megatron and take his place; however, he's too often afraid to take the first shot and simply grumbles from the sidelines.

And here's the rub: Megatron doesn't get to take a day off.

Why Megatron Can't Take the Day Off

Other Decepticons can disappear into the background and sulk. Autobots can do the same. Even Optimus Prime can go hide in the control room of his base with the supercomputer Teletraan I. And it won't make a difference. When he pops out again, the other Autobots will still respect him.

But Megatron? He doesn't have such luxuries.

He needs to be visible.

He needs to be leading.

He needs to recover quickly from setbacks.

If Megatron is not visible to his followers, they will begin to doubt him. They will suspect he is weak. And in such a perception and strength-based society, that will soon lead to overthrow attempts. He must constantly appear before them, showing a state of ultimate power.

Should Megatron not be leading with some new stratagem to capture energy, destroy the Autobots and effect a swift return to Cybertron, the other Decepticons will look for someone else who will. Regardless of their moral alignment, this group is highly motivated. They do not want to sit around and wait for something to happen.

And if Megatron is emotionally crushed by the failure of his latest plan, that loss of faith will immediately trickle down to his followers. Adult criticisms of Megatron include the observation that he is too quick in the face of real resistance to shout, "Decepticons, RETREAT!" and get the heck out of there. (All of the Decepticons can fly, though most of the Autobots cannot; this makes an exit to Stage Up an easy option to take.) But he is always back with a new idea and refreshed enthusiasm.

Again, if Megatron--and he alone of all the Transformers is in this position--did not do these things, he would quickly be killed and replaced. Megatron does not get to take a day off.

How Badly Do You Want It: Megatron's Lesson for You In the Real World

Now take this to the real world.

Many leaders are in a similar predicament. Call it obsession, call it knowing their true purpose, call it a bad idea. Whichever you like: they have worked themselves into a position where they are symbolic as well as active, and they cannot disappear without consequences. Martin Luther King, Jr. was one of these people, for example. I'm sure you can think of others. People who stand for a cause or an idea and stick with it. Their commonality is that after a point, they cannot publicly behave in a manner inconsistent with the world's perception of them. They cannot vanish for awhile. They have a place to hold. Ground to keep covered. Ideals to uphold.

Consider this with your own business or role.

Really consider it. Not being able to take a day off can be miserable, I know. But it is the possible price for "success"...when you are known for something and you can't stop. Do you love what you do? Have you staked your life on it? Or are you just playing around?

Notice how the three things Ol' Megs has to do are the same things you must do as a business owner to stay alive:

Curious, no? There aren't right or wrong answers here. I just want you to think about Megatron's situation and compare it with your own. Where do you find yourself? What do you want? How badly do you want it?

>> Jason Kanigan is a business development expert from the planet Earth. Did this discussion help you? Please Share, Like or Comment to let others know! Also, you can subscribe with the big red Follow button at the bottom right. Want help with positioning your own business for success? <<

(I don't want you to miss this, which is the first Disqus comment below; please feel free to respond there!)

My thanks to the individual who submitted this to Reddit. I appreciate it!

One reader commented on Reddit that I was suggesting people be more like Megatron, or that he should be a role model for motivation (and the reader didn't agree). This is incorrect and not the point of the article.

The article is about the price of success, to get you thinking about what it means to you, and what you're willing to pay for it.

Paying for success, however you define it, like Megatron does can make you miserable. Not being able to take a day off can make for considerable unhappiness. It's not necessarily a good choice, and I talk about that in the write-up.

Having been an employment coach and worked with many other coaches, I will share with you that when people find out their "life purpose", they often don't like it. Their life purpose isn't fun. It's a real slog, to get done what they need to get done. The BS sales pitch of the self-actualization dreamers is that discovering your life purpose is going to be all fireworks and leaping dolphins and applause and confetti. Sometimes it can be absolute misery...but it HAS to be done.

Megatron has his "life purpose." He is fully engaged in it, and *he cannot change his behavior*. If he does, he will cease to be himself. (Why do you think so many people have problems with 'retirement'?) That is a little scary, isn't it?

This is what I want you thinking about.