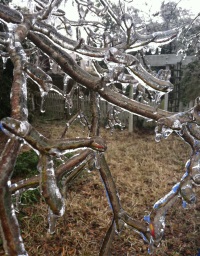 The 2014 Ice Storm was the very first I personally had to sit through. We'll get to one I had a peripheral involvement in over a decade and a half ago, but first: yes, that is 3/8" of ice on trees in my front yard. Being from Vancouver, Canada, where temperatures are typically mild and snow is nature's frozen water form of choice, I'd never seen this effect before. And a simple truth kept getting proven during the night and morning of February 12th: ice is heavy.

That little factoid caused serious problems. Ice would start falling off a branch near the treetop, and because ice is crystalline, its brother and sister shards would come along with it. For good measure, part of the treelimb would snap off and take the ride, too. Now we have 10, 20, even 50 pounds of ice and tree heading towards the ground at 32 feet per second and increasing.

Imagine a frozen waterfall smashing all over the earth, and carrying a branch bigger than your arm for good measure. The noise it all makes as it hits the ground is alarming. I began to wonder how loud avalanches really are. Not watching one on tv--when you're actually present. If these collapses are any indication: thunderous, roaring, deafening. Apologies to my dog, but going outside wasn't an option for her yesterday lest she be unceremoniously crushed. The eight-foot long, six-inch diameter tree chunk right outside our kitchen door is there to prove it.

Damage Caused by the 2014 Ice Storm

Occasionally a powerline would get in the way, and SNAP now the block of homes is off the grid. No internet, no hot water, no heat. And it got COLD inside, very quickly. At one point two evenings ago it was warmer outside than inside my house. People left their lightless and heatless homes thanks to the 2014 Ice Storm and went to stay with one of the lucky few who still had electricity. You should have seen the power company's outages map--no, I'll show you:

With trees drooping heavily into roadways and blocking lanes, debris everywhere, power cables down in the street and homes abandoned, all we expected to see next was shuffling, bloody, animated corpses mumbling, "Brains...brainsss..." And this is today's map! It was worse before. Driving along Wrightsville, a main street in the area that cuts east-west across town, on our way to IHOP for dinner and phone recharges two nights ago we saw nothing but dark. Block after block after block. Spooky.

After a 30-degree night with candles, flashlights, and ineffectual extra blankets, I went to South Carolina to visit with a client yesterday. Fortunately, in spite of the 2014 Ice Storm, the roads were mostly clear and I didn't encounter any black ice. The car was a wonderful, controllable environment: heat! light! the feeling of getting things done! And then I returned home. Ugh. My wife had gone to her parents', whose power had been restored. I hung around the cold house for an hour or so because outside, arborists had been trimming damaged trees since before I'd returned. That was promising. Gosh those guys looked miserable. After working all day in the windy, freezing temperatures, who wouldn't be. Using some precious battery power, I checked the outages map and discovered they had put up an estimate for restoration: Saturday, 11:45 PM. Yes, another day and a half. But outside, four Duke Energy trucks pulled up.

I laughed. Not one, two or three trucks. Four. White goliaths with bucket cranes. They took up half the block. Our neighborhood was getting the royal treatment. I noticed if you're going to join the ranks of Duke or be an arborist, putting some serious effort into growing a beard is necessary. Minutes later, the power was back on and the 2014 Ice Storm was over for us (for now, at least)--a full 30 hours early. Good job, Duke.

Back at the start I mentioned a memory the 2014 Ice Storm brought back. In 1998 I was working for a company that sold power plants. That winter there was a severe ice storm in central and eastern Canada. Safe on the west coast, I remember thinking in my early 20s ignorance, "What's the big deal? Some snow, a little ice?" Yeah. I had no idea. I had never seen ice form inches thick on trees and cause them to topple. My boss had some good contacts and brokered a deal to supply Hydro Quebec, the power authority in one of the worst-hit regions, with dozens of generator sets sourced from all over North America. I was tasked with managing the logistics. HQ got them in only a few days and were very appreciative. They even sent us a nice Thank You letter in customary "Franglais" to tell us so.

Opportunity is always around you. Yes, there was no power at my house yesterday and the day before, but I went to McDondald's two days ago in the thick of it and they had wifi. If I had really, badly needed to use the Web, I could have done so. This experience also underscores the fact that in desperate times there's always a desperate need. You saw the outages map above. It's sunny today, but all those people--over 75,000 of them just in my town--are still without power. What would Duke pay for gensets right now? Would they quibble? Would they try to bargain? No. They'd say "Yes please," and "Thank you very much."

Events like this, perhaps not so dramatic or even weather-related, are going on all the time. Are you looking for them? Do you know how to spot them, and take advantage of them? The need could be as simple as, "Our star tech writer disappeared on us--and we desperately need good content by tomorrow." Are you in the position to know about this problem? Can you solve it? Are you ready to charge what you are worth?

I'm writing today's post via personal hotspot, because the cable internet is out. Another 2014 Ice Storm casualty. This will be my online activity for the day. The good news is that we have heat, light, the ability to cook. For now, at least, ice has stopped crashing down from the sky. The things we commonly take for granted were never so important. Happy Valentine's Day.